Laura fell down the rabbit hole. Lots of adventures ensued… and lots of food too! 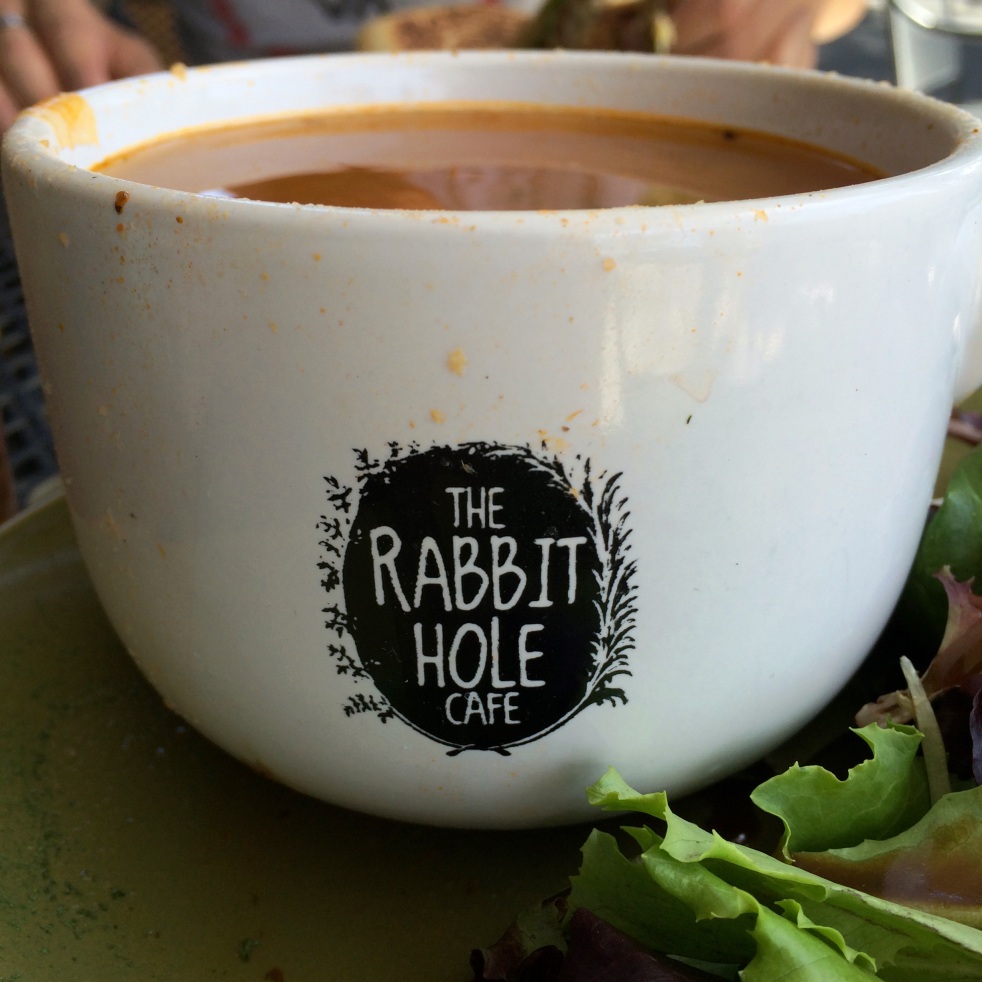 After a crazy-busy work week, I was ready to head out on Friday evening to Pleasanton for a fun and relaxing night. I arrived to see Tony’s condo and was greeted by the lovely Wellsie (the one who named this very blog). I was informed we were headed to a “gastropub” and wondered what the heck that was… Apparently it’s a restaurant with yummy food, wine, booze and a bar that gets pretty bumping in the late night.

Much to my approval, we started the night with a meat and cheese plate and bottle of wine! Those are candied walnuts under the berries… possibly the best part of the plate. 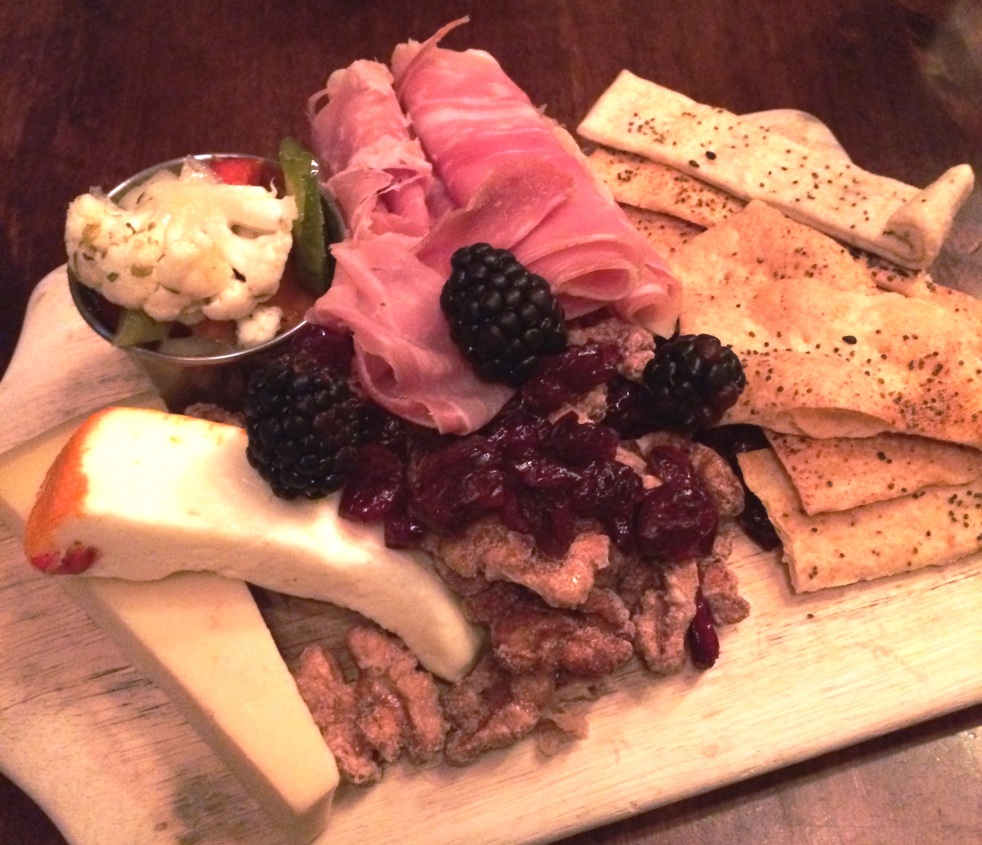 We ate and drank and Tony unwisely ordered the recommendation of our server for a beer that he said tasted like “s’mores”. He wasn’t too pleased. Good thing the food was fantastic. I got the seasonal option – shrimp and asparagus pasta – and it honestly could have done without the pasta! I’ve saved it on my list of things to perfect.

I know I can make it better… Plus I hate when restaurants serve the shrimp with the tails on. They’re basically FORCING me to awkwardly eat my food! I think I ate pretty much all of the fries (from both of the other parties). 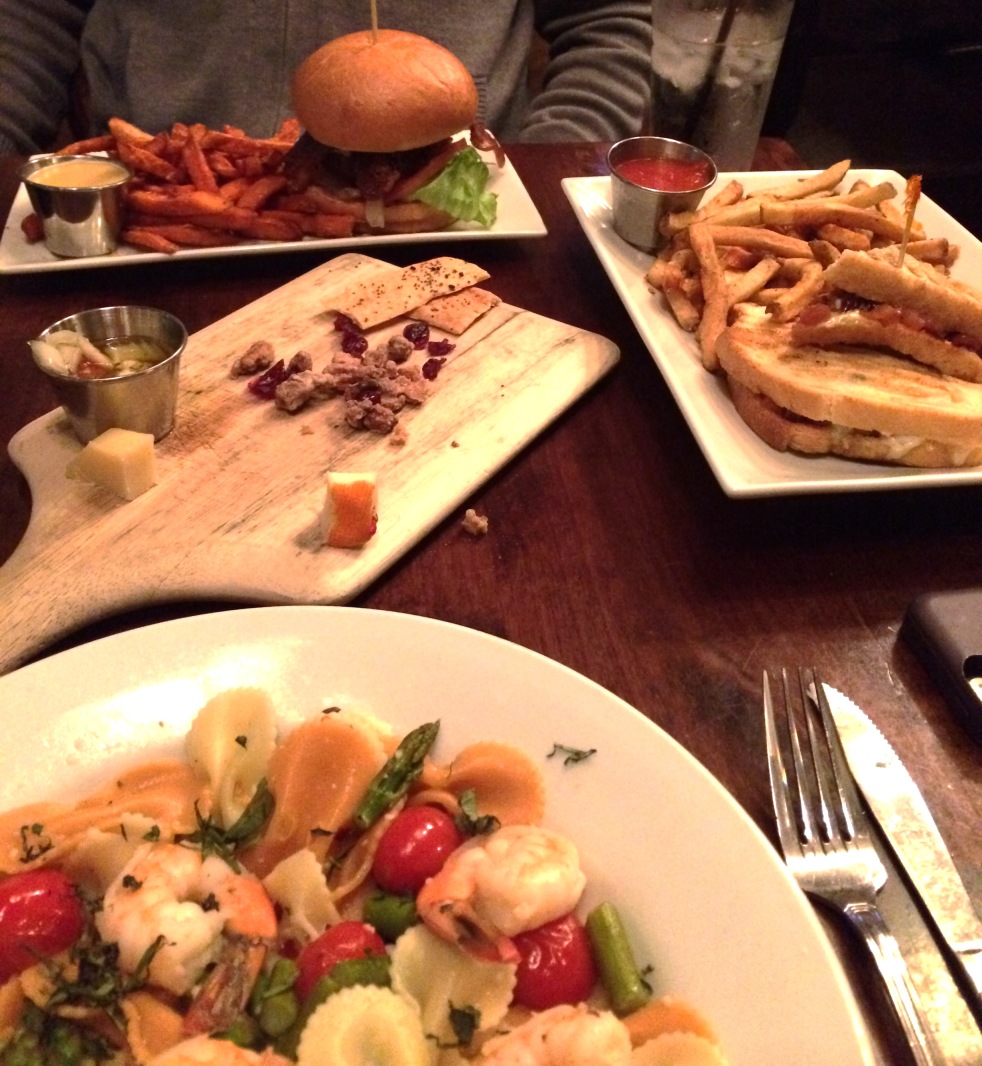 When the meal was over, we wanted to head out to a bar to continue the night, only to discover that it was pouring outside. I don’t think so. Anybody that knows me, knows that I don’t want to mess up the hair. Well, as it turns out, the bar area of this restaurant brings in a couple DJ’s around 9pm and starts playing some jams.

We ordered drinks and people-watched for the rest of the night. I’m SO GLAD they love it as much as I do. And there were some interesting characters coming to dance. Photo got a little blurry; perhaps because the person taking the photo had been drinking wine and champagne all night… CHEERS!

After we’d had our fill of people watching and fancy champagne cocktails, we decided to head back.

I have this little problem with the drunk-munchies, and the hour was just right for some snacks. Why not start the indulging early and treat myself to a little quesadilla!?

And it wouldn’t be complete without Laura’s “crema” that she had prepared a night earlier. It did not disappoint. In fact, I made a second one because it was so good! Then bed time 🙂 I got to spend the night on the futon mattress with no futon LOL!

After rolling out of there, by maybe 11am, I headed home to hang out with the cats and do nothing. Well, besides try out my recipe for peanut butter banana muffins 😉

I got the idea from the chocolate swirl banana bread I made for Easter. While I love chocolate, I have an otherworldly obsession with peanut butter… that I’m sure will be the death of me. I just can’t get enough of the stuff! 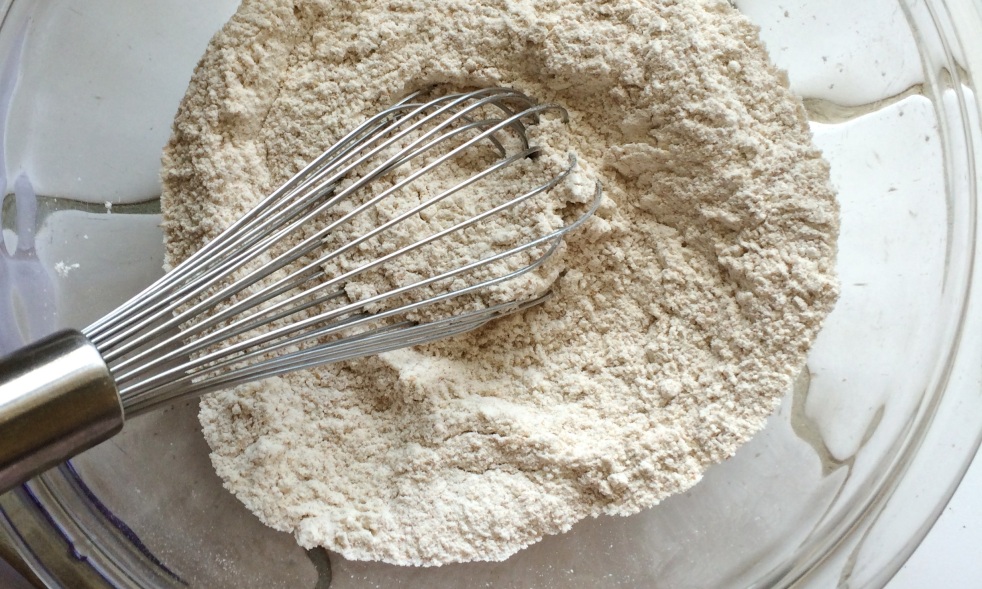 Look at those BEAUTIFUL muffins! So round and fluffy. I was so proud. 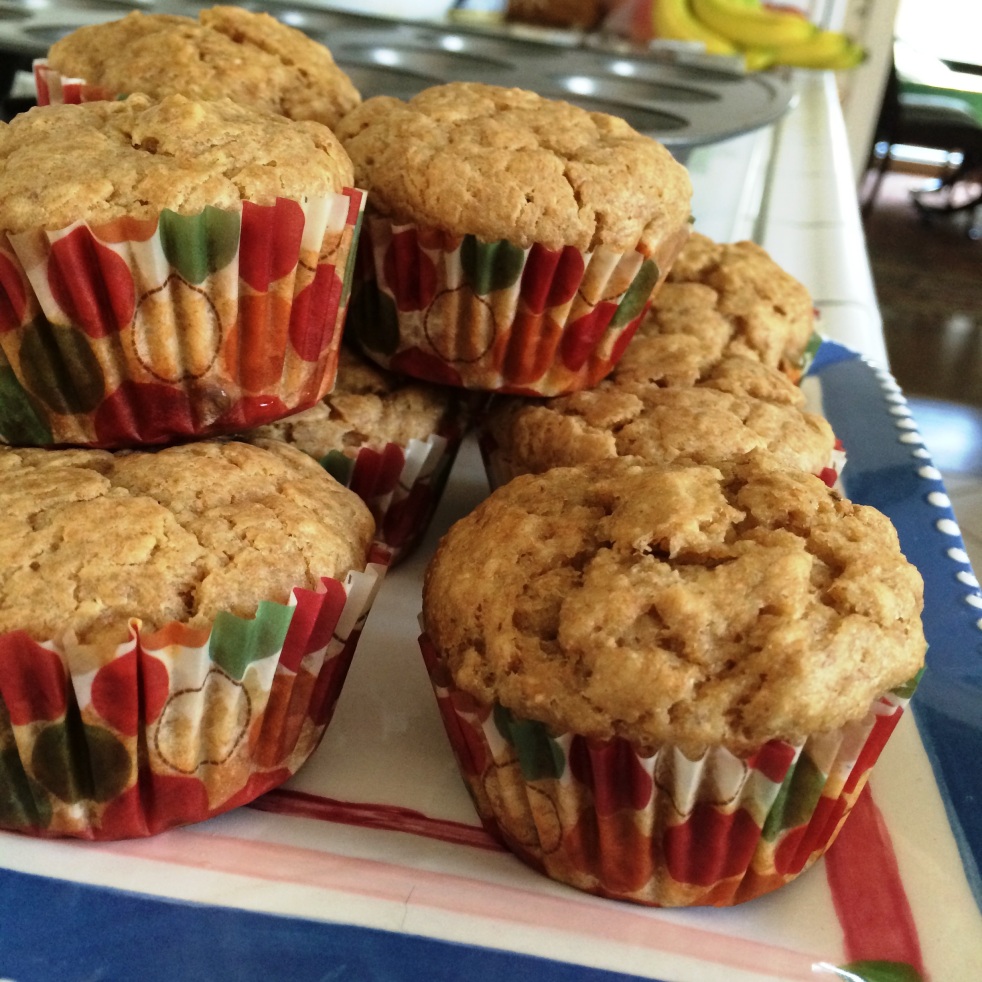 I got the cutest cupcake liners, “enjoy”. I think I will, thank you very much.

They were REALLY moist inside, almost too moist actually. I replaced a lot of the sugar and butter with applesauce, so it kept them from drying out, but you could taste the apple flavor too much. The peanut butter flavor didn’t really shine through as much as I wanted it to. For that reason, I’m not going to post the recipe. It’s not good enough yet.

I am going to play with the recipe until I get something that screams peanut butter heaven. Better post to follow… Now mind you, they were still tasty, just not quite right.

And here’s Henry. My big, fat, fluffy baby. He came to sit outside with me while I soaked up the sun in the courtyard.

I couldn’t resist. Sorry for those of you that can’t stand these furry little bundles of love. 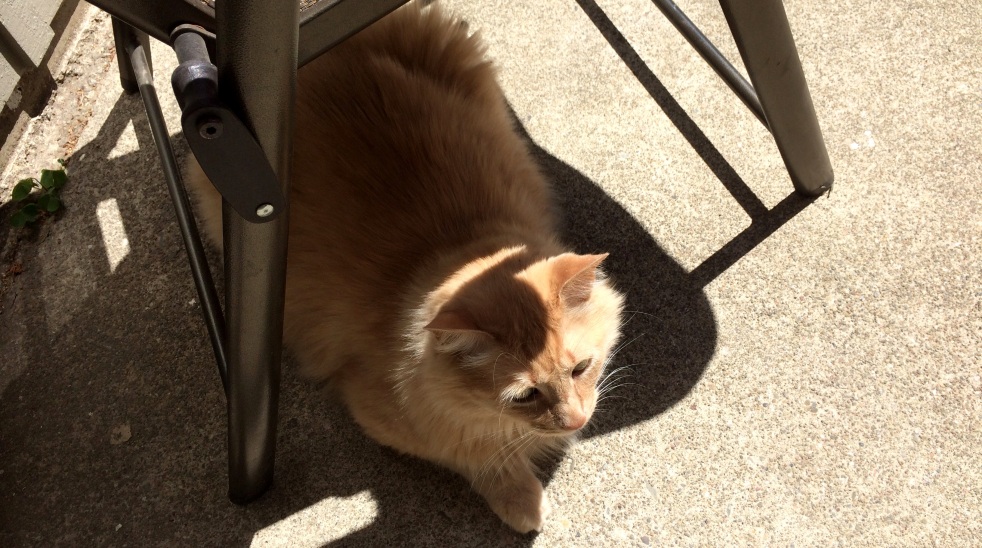 Phew, this is going to be a long post… I haven’t even gotten to SoCal yet!

On Sunday afternoon I headed out to see my lovely friend Ferriera and her new fiance!! So excited for them 🙂 I also headed out there to mooch off their guest room because they only live a half hour away from the Sacramento airport (and that’s an hour closer than Chico).

We chatted, and had a bottle of wine. And LOTS of cheese… like way too much for any person.

The next day I headed off to the airport bright and early. I had just enough time to grab a Starbucks from the line and head over to the boarding lines at my gate. Off to Burbank!

I got to the Burbank airport about 10:00-ish and went to go grab my rental car. I went to where all the stations were and went… Um what? Where is “Midway”?? Well my dumb ass didn’t realize it was an off-site rental agency and called the office in a bit of a panic. I was told to call and get into the shuttle and they’d take me on my way to getting the car. I ended up in a little Corolla – with touch screen and bluetooth – and it was pretty nice!

I got to the office in time to just log in and check a few emails before we headed out for lunch. The first of MANY meals on this trip.

Then I got to go see AJ!! I left work and drove to his store on Melrose. Gosh, I could get used to being surrounded my fame and fortune all the time. All the pretty stores and adorable restaurants. And the celebrities that everybody gets so used to seeing eventually.

West Hollywood is so cute! If there were more straight boys roaming the streets I could totally make it my home 😉

AJ took me around the block and showed me his digs at work. Then we went to this little place called Saint Felix and sat outside. We drank a couple fancy drinks (I got a pear manhattan… mmmmm!) and got some snacks. I guess I was too excited to eat to take a picture, but I got some delicious polenta cakes with cream and salsa, and an ahi slider with wasabi aoili. Tasty

It was decided then and there that I would be moving down there and living a fun and fancy life quite soon. On a much less exciting note, I got a ticket on my way home, two exits from my hotel!! 😦

Wednesday morning it was hard to get up. But dinner that night was sushi. We tried sparkling sake – never had it before! The menu recommended eating it with oysters and I think it would have paired nicely because it was sweet.

PS: Did you know that some people consider oysters to be vegan? Apparently because they can’t move or “run away” from predators, that makes them more of a plant than animal. My shady-vegan ex-boss totally eats them either way! 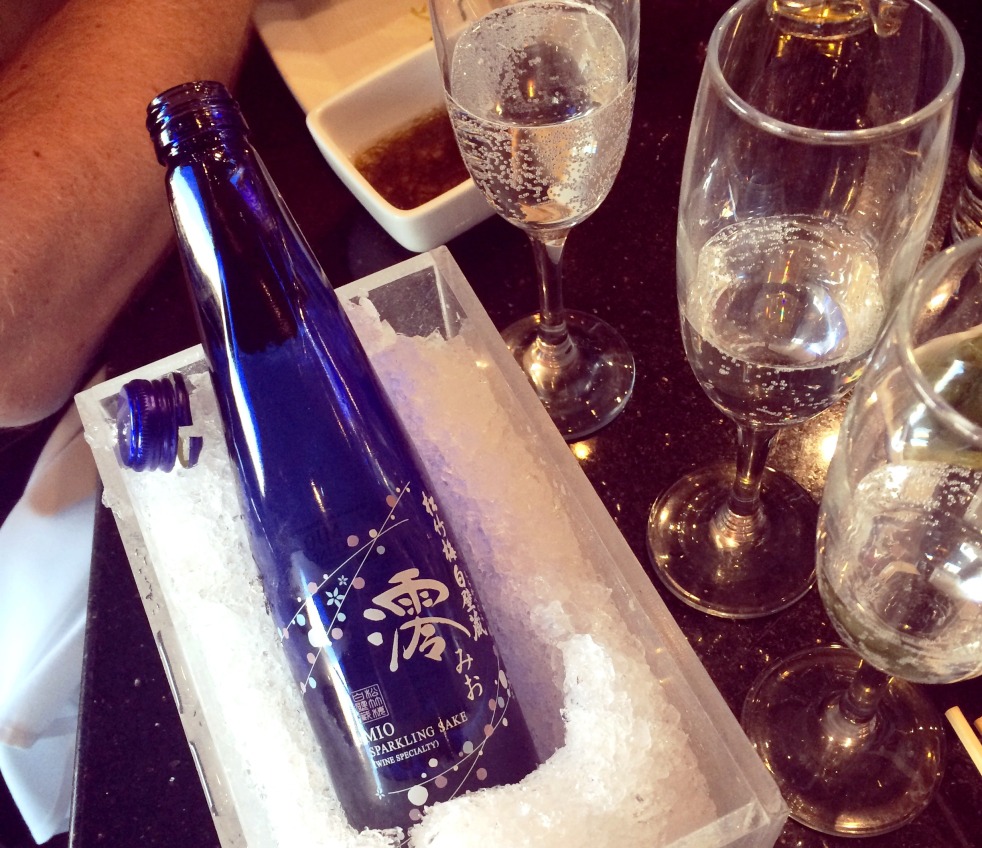 I got a chirashi bowl – my favorite thing to get if we’re not sharing a sushi feast. Look at all that glorious fish!

And Matt got the below. Don’t remember what it was called, but it’s GORGEOUS! 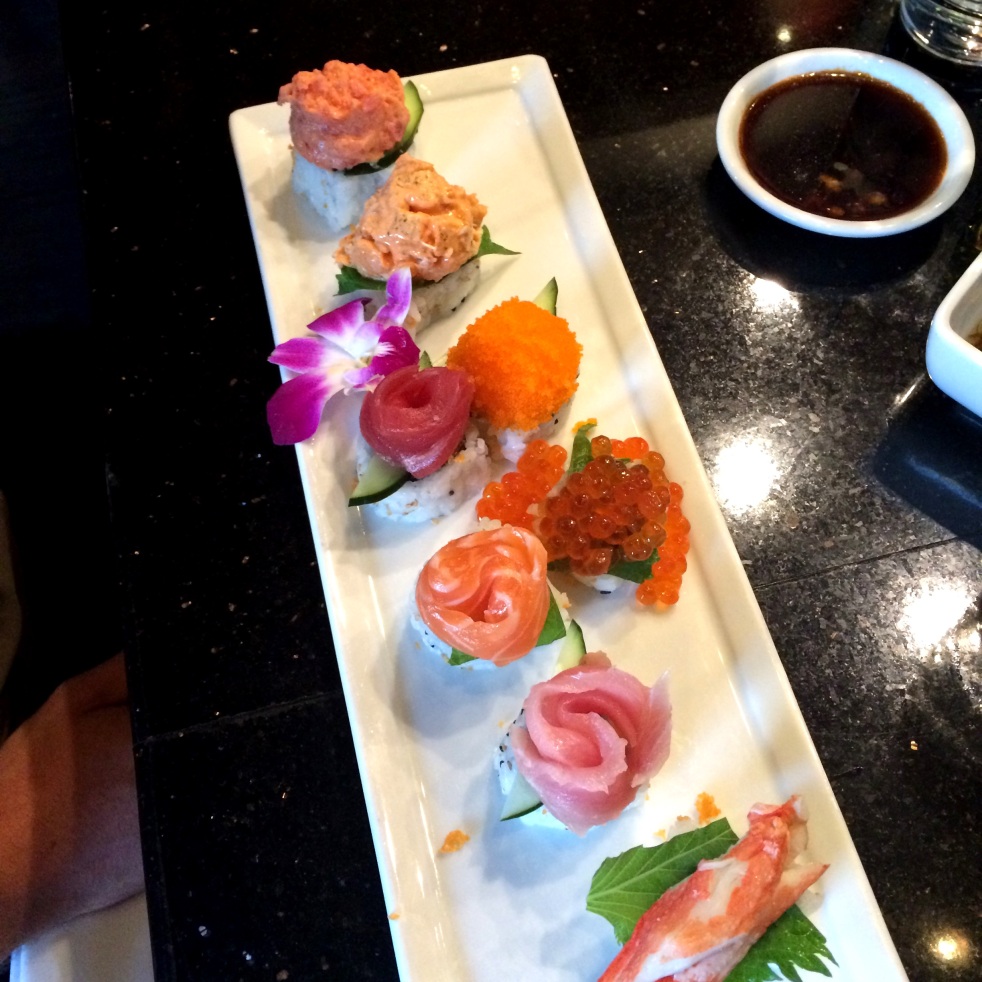 I had a little bit leftover. And like a weirdo, that was my breakfast on Thursday morning hahahaah

Oh to Thursday now… This place was so cute that we stopped for lunch. A totally vegetarian restaurant with a bunch of vegan options… “The Rabbit Hole”. Sitting outside, sipping some iced tea. Not a care in the world 🙂

Last happy hour of the trip, at a place called Public School 805. It was alright. Got a couple whiskey-coke’s and snacked a little bit. I didn’t get a picture of it, but we ordered a PB&J slider with bacon. It was a teeny patty with peanut butter, habanero jam and a thick slice of bacon. It was FANTASTIC! Made me think about re-trying the Jiffy Burger at the Bear back in Chico… 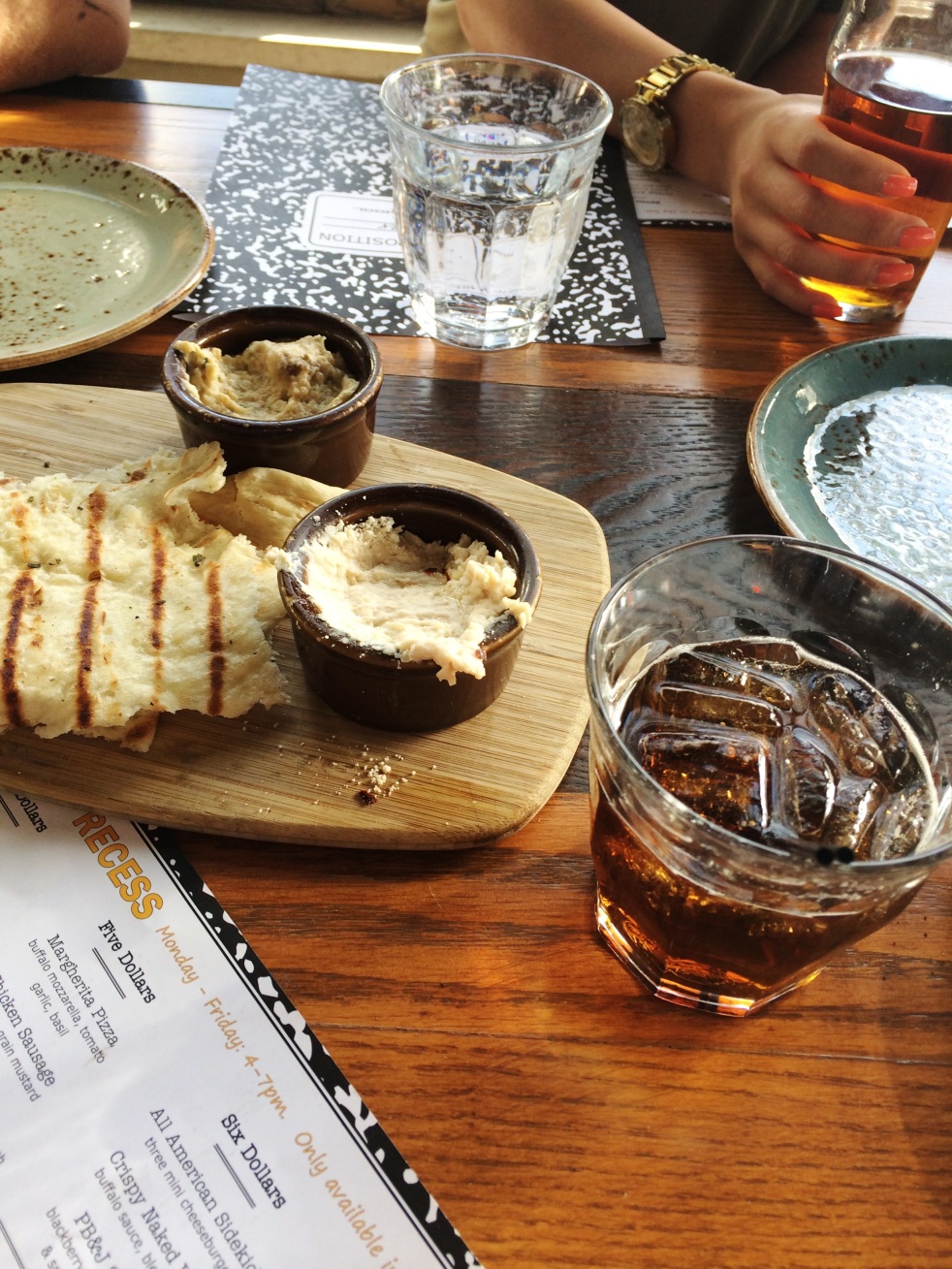 Sushi (yes again) out in downtown Ventura for dinner on Thursday. Got my staples: miso and side salad. 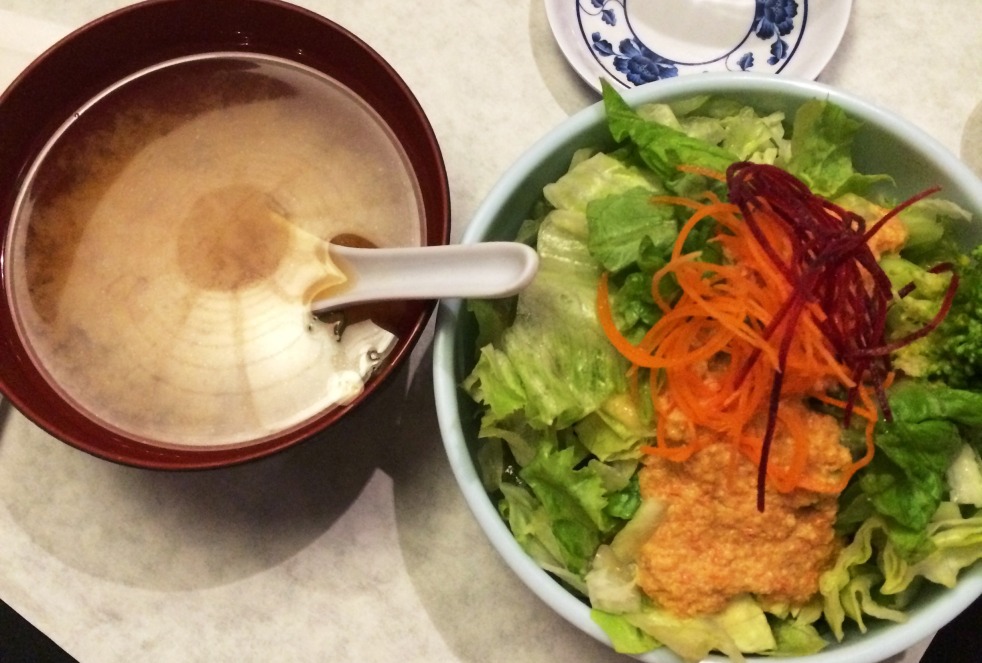 And another favorite. It’s called different things at various restaurants, but it’s a bunch of fish wrapped in cucumber with no rice. Seriously delicious. Throw a bunch of wasabi on that baby and I’m good. 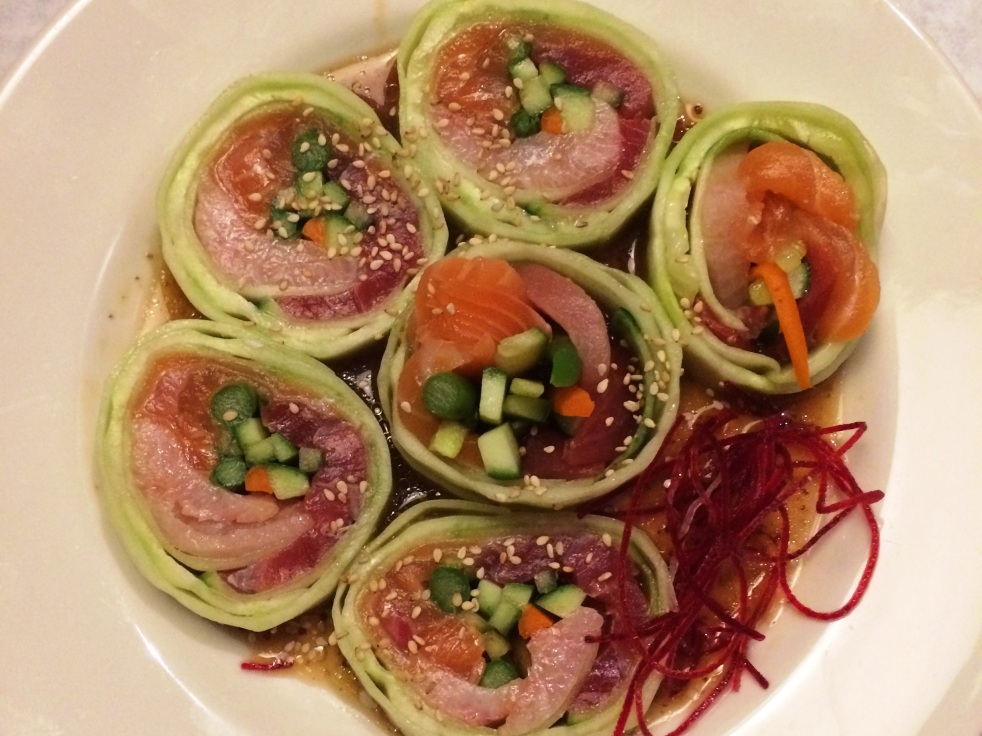 I left work a little early on Friday to make sure I didn’t get stuck in the dreaded LA traffic. Which I didn’t. Returned my rental car, got to my gate and had time to chit chat with Mom for a good half hour before getting dinner – a burrito bowl, which was curiously my only Mexican meal – and finally boarding the plane.

Headed straight out to my Auntie’s house in Folsom because we had haircuts the next day. Couldn’t wait to get home and finally just relax!

Picked this beauty and stuck it on my night stand to brighten my mornings. LOVE the rosebushes out front of our little Eaton house 🙂